A new “pay only for what you use” licensing model

Under this new license, companies with large databases who market to a smaller subset of customers can pay for a smaller license tier, based on the size of this subset. The previous license was based on total database size rather than the actively marketed universe. This model lets you choose the licensing tier that makes the most sense for your business.

Self-updating with minimal IT support

MarketWide updates can now be applied without administrative privileges, in the same fashion as popular web browsers such as Chrome and Firefox. These updates use a low footprint, secure self-updating method, and greatly reduces (if not eliminates) the need to involve IT with every update.

MarketWide’s TouchPoint campaign manager now includes new commands and methods for classifying and categorizing a campaign audience. These include:

TouchPoint’s MarketFlow has been enhanced with powerful capabilities in Branches and Touches (solicit output), including:

Performance improvements have been made to TouchPoint campaign Constraints, along with new features for testing and simulating results before running a campaign.

MarketWide Email has received enhancements such as: 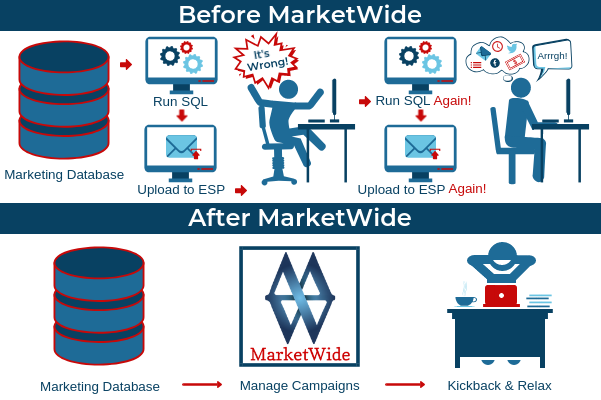 MarketWide is DSI’s powerful multi-channel marketing automation system. For over 10 years, it has helped our customers and agency partners create and automate marketing campaigns. In one day or less, MarketWide can be installed on your network and connected directly to your existing SQL Server or Oracle marketing database. Contact us to arrange for a no-obligation demonstration.

Learn How DSI Can Increase Your Bottom Line

This website stores cookies on your computer. These cookies are used to collect information about how you interact with our website and allow us to remember you. We use this information to improve and customize your browsing experience as well as for analytics and metrics about our visitors. To find out more about the cookies we use, see our Privacy Policy.

If you decline, your information won’t be tracked when you visit this website. A single cookie will be used in your browser to remember your preference not to be tracked.